The title of this post is that. My best morning in Lisbon. Because it was the only day I woke up at 5 in the morning. I arrived in Lisbon late at night with a headache. The owner of the apartment I rented during my 5 day stay left me alone to sleep my headache off and he even offered me 600 mg of Ibuprofen, which I drank with eagerness, thinking that my headache was psychological and that it would all go away after my first gulp of water. It didn’t, so I slept at 11pm.

The next day, I opened my eyes before 5AM without my alarm clock. I felt proud. I knew that I didn’t want to sleep anymore. I was full of energy, almost like I was ready to go running. But instead, I took my camera with me and headed off to explore a little. The apartment was near the bay.

Dawn is not that much different from dusk, except that you experience blessed silence at dawn. Before sunrise. 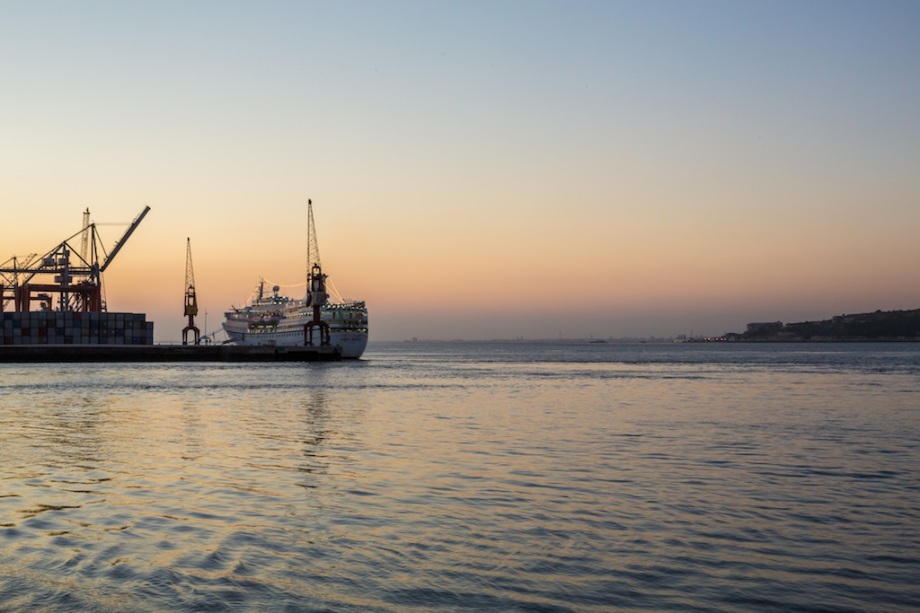 I crossed the overpass from the Palais de Congress and found that there was a bridge so similar to the Golden Gate Bridge in San Francisco. Yowza. But more on that later.

I walked beside the river/bay and found a fisherman sitting so serenely while waiting for his catch of the day. I took a photo from far away. I didn’t want him to see me. I didn’t want to intrude.

So I walked away, found a place with a bunch of restaurants that reminded me a little of Cour Saint Emilion in Paris. I know it’s not the same, but I felt for a moment, that the atmosphere was the same. But how would I know that? Everything was closed at this hour. I had the feeling that come night time, this place rocks.

I walked back to where the fishermen were. I really felt courageous at that time so I approached the guy and asked if I could take some photos of him while fishing. He said Yes!

I was so happy. We got to talking a bit about Portugal, how it was my first time to be there and that I just arrived. Well, he’s not from Lisbon. He took the train from somewhere 30 kilometers away and he just came to that spot to fish. I asked him if he would eat the fish after. He said, “Of course,” like I was crazy for even asking.

Of course, but how did I know he didn’t plan to sell. Because he only had one pail, not a full net. Duh!

His name is Vash. He’s a big football fan. He likes to travel around Europe to watch football. His favorite city so far, well, guess – it’s Paris! His mother comes to Paris once or twice a year.

Vash came with a friend, who prefers sleep to fishing. You see the little orange tent?

And do you remark the drawings of the dolphins behind? Apparently, dolphins used to come here A LOT, a long time ago, but then they stopped coming for no reason at all. And well, a few years ago, a group of dolphins (school of dophins? – not fish!) swam right by this river/bay and because of this, the drawings were drawn.

I really liked Vash. I reminded myself that I was there to take photos and not to chat him up and make him miss fishing. He was so down to earth, totally unpretentious, and I felt his sincerity and warmth. He was also so happy and surprised when I told him my real name, Fatima, as in Our Lady of Fatima from Portugal.

We parted then, with him telling me sweet, sweet words. I told him good luck with everything. I had the feeling that he wanted me to stay some more. I guess he wanted someone to talk to while fishing. I left with his friend still snoring.

The city girl in me  couldn’t believe that he would take the train to go back home, carrying with him all the fish they caught for the day. Once I have ridden in a bus where people carry chickens in cages, or sometimes just roosters used for gambling. I still remembered how creeped out I was with chicken feathers. But well, fish are different. Fish are friends, not food. Yeah right, tell that to Vash.

Oh and his last words were goodbye and enjoy Lisbon, but before that, I showed him the photos I took in my camera and these were his sweet, sweet words, “That is a really nice machine”.